So how to overcome the issue?  Say that you have an IN statement with a list of values and have sucessfully used a macro variable to build a list from an existing dataset:

then using it in an IN statement:

This is fine until the list becomes too long and the dreaded ERROR message appears in your LOG.

Instead of writing values into a macro variable - construct a macro program definition containing all of the values...

The external file now contains a macro program definition with the %macro... / %mend... statements before and after the long list. 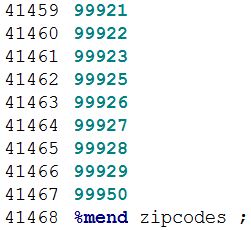 The %include statement then retrieves the macro program and compiles the definition.

The macro program can now be called in essentially the same way as retrieving a macro variable:

Again - please note that there is no semicolon on the macro program call - otherwise it would cause an early termination of the WHERE statement!